CHAPTER 41: Off With Their Heads!

`Let's go on with the game,' the Queen said to Alice; and Alice was too much frightened to say a word, but slowly followed her back to the croquet-ground.

The other guests had taken advantage of the Queen's absence, and were resting in the shade: however, the moment they saw her, they hurried back to the game, the Queen merely remarking that a moment's delay would cost them their lives.

All the time they were playing the Queen never left off quarrelling with the other players, and shouting `Off with his head!' or `Off with her head!' Those whom she sentenced were taken into custody by the soldiers, who of course had to leave off being arches to do this, so that by the end of half an hour or so there were no arches left, and all the players, except the King, the Queen, and Alice, were in custody and under sentence of execution.
So Welcome back to the land of wonder and where the saying, 'Off with her head' is a regular statement! Well here in wonderland this week, that is exactly what we want you to do. This week we want you to take your stamps and yep you guessed it,'Off with their heads'. So we are asking you to alter your stamps and mix it up a little by giving them a new head or body. Ohhh this is going to be sooo much fun seeing what you come up with!!!
Up for grabs this week is a Scor Buddy from the lovely people at http://www.scrappingreatdeals.com. So off with their heads for your chance to win this awesome prize. You have until the 3rd of Dec to play along with us.
Make sure to pop past the Oh Alice blog to see the rest of the DT's Gorgeous Creations!
So onto my card, I have used the very Gorgeous Cheeky Santa head with Sweet and Toxic's Creeper Girl body! I really liked how they turned out, it kind of looks like she is singing carols...hehe! 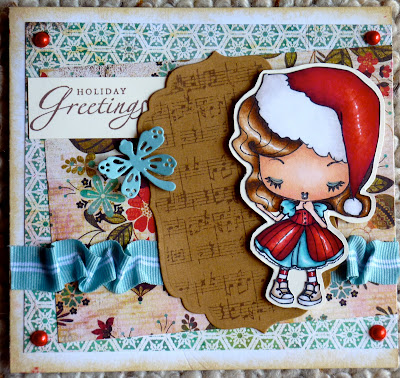 So I am entering this card into a couple of Challenges:
7 kids Chalenge - Untraditional Christmas Colors
Club Anya - Kristy's Altering Embellishments - I have colored my pearls red to match my card.
Posted by Emma at Saturday, November 27, 2010

Thank-you so much for taking the time to leave me some love! I love reading all your comments and it always makes my day!